Question: Which triggers are created when master -detail relation?
Answer:

*  ISOLATED
a) on clear details
b) on populate details

Question: which system variables can be set by users?

Question: What are object group?
Answer: An object group is a container for a group of objects. You define an object group when you want to package related objects so you can copy or reference them in another module.

Question: What are referenced objects?

Question: Can you issue DDL in forms?
Answer: yes, but you have to use FORMS_DDL.

Restrictions: The statement you pass to FORMS_DDL may not contain bind variable

references in the string, but the values of bind variables can be concatenated into the string before passing the result to FORMS_DDL.

Question: What is SECURE property?

Answer: – Hides characters that the operator types into the text item.  This setting is typically used for  password protection.

The Difference between Key-next and Post-Text is an very important question. The key-next is fired as a result of the key action while the post text is fired as a result of the mouse movement. Key next will not fire unless there is a key event.
The sequence of firing in a text item are as follows::
a) pre – text
b) when new item
c) key-next
d) when validate
e) post text

Question: Can you store pictures in database? How?

Answer: Property class inheritance is a powerful feature that allows you to quickly define objects that conform to your own interface and functionality standards. Property classes also allow you to make global changes to applications quickly.  By simply changing the definition of a property class, you can change the definition
of all objects that inherit properties from that class. Yes. All type of triggers. 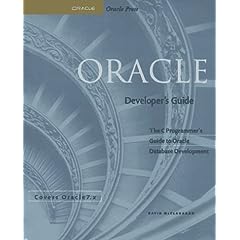