Hello Friends, here i like to give some brief on Cost based optimizer in Oracle, i am not covering Rule based optimizer as it is not much in use as well not recommended. plz share ur feedback or if u like to contribute more on this topic,

Whenever you execute a SQL statement, a component of the database known as the optimizer must decide how best to access the data operated on by that statement. To figure out the optimal execution path for a statement, the optimizers consider the following:

The RDBMS kernel defaults to using the cost-based optimizer under a number of situations, including the following:

The way that you analyze your tables can have a dramatic effect on your SQL performance. If your DBA forgets to analyze tables or indexes after a table re-build, the impact on performance can be devastating. If your DBA analyzes each weekend, a new threshold may be reached and Oracle may change its execution plan. The new plan will more often than not be an improvement, but will occasionally be worse.

If you do want to analyze frequently, use DBMS_STATS.EXPORT_SCHEMA_STATS to back up the existing statistics prior to re-analyzing. This gives you the ability to revert back to the previous statistics if things screw up. When you analyze, you can have Oracle look at all rows in a table (ANALYZE COMPUTE) or at a sampling of rows (ANALYZE ESTIMATE). Typically, When a table is analyzed using ANALYZE, all associated indexes are analyzed as well. If an index is subsequently dropped and recreated, it must be re-analyzed. Be aware that the procedures DBMS_STATS.GATHER_SCHEMA_STATS and GATHER_TABLE_STATS analyze only tables by default, not their indexes. When using those procedures, you must specify the CASCADE=>TRUE option for indexes to be analyzed as well.

Following are some sample ANALYZE statements:

If you analyze a table by mistake, you can delete the statistics. For example:

Analyzing can take an excessive amount of time if you use the COMPUTE option on large objects. We find that on almost every occasion, ANALYZE ESTIMATE 5 PERCENT on a large table forces the optimizer make the same decision as ANALYZE COMPUTE.

Inner workings of the cost-based optimizer

The cost-based optimizer’s functionality can be (loosely) broken into the following steps:

3.       Calculate (estimate) the cost of each execution plan using all available object statistics.

Primary key and/or UNIQUE index equality —A UNIQUE index’s selectivity is recognized as 100%. No other indexed access method is more precise. For this reason, a unique index is always used when available.

Range evaluation —For index range execution plans, selectivity is evaluated. This evaluation is based on a column’s most recent high-value and low-value statistics. Again, the cost-based optimizer makes the assumption that the table (and subsequent indexes) have uniform data spread unless you use the FOR ALL INDEXED COLUMNS option when analyzing the table.

System resource usage —By default, the cost-based optimizer assumes that you are the only person accessing the database. Oracle9i gives you the ability to store information about system resource usage, and can make much better informed decisions based on workload (read up on the DBMS_STATS.GATHER_SYSTEM_STATS package).

Want to give some comment to author ( Shivmohan Purohit ) Cancel reply

The Know-Oracle was formed in early 2007 with the goal of helping & share some of the good knowledge areas for Oracle Applications. Oracle Cloud erp, Oracle Cloud 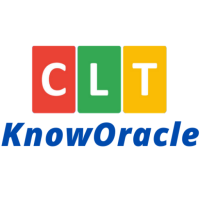 Link in bio 😍😍
May Lord Krishna be with you and your family, always! Blessings of Health, Wealth, Love, and Happiness. Happy Janmashtami❤️🙏
CLT Wishes you Happy Raksha Bandhan :)
A very blissful and a Mubarak Eid al-Adha to you❤️
CLT Consulting
Guru and God both appear before me. To whom should I prostrate? I bow before Guru who introduced God to me. – Kabir